Through the years, we’ve either been involved in one or seen one occur…the low impact collision, the “fender-bender”.  Injuries from these “minor” impacts have been reported by patients, duly noted by doctors, and advocated by lawyers.  Patients and in some cases even doctors have been suspected of fraud, since the injury can’t simply be due to a bump on the fender…or can it? 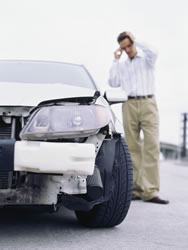 When vehicles collide, G forces are created.  One G force (refers to the force of Earth’s Gravity) equals 32 feet per second.  Based on research, an eight mph collision can create forces measured up to 2 G forces.  Car collisions occur in fractions of a second. (1).  The human frame is not designed to withstand these massive forces in such a brief period of time.  The elasticity of muscles, tendons and ligaments are time dependant.

Research has also shown that acceleration of the vehicle and the occupants are significantly affected in vehicles that are equipped with tow-bars (2).  A tow bar can absorb the forces of the collision, not allowing the vehicle to crush.

Croft (3) did a study in 2005 regarding correlation of crash severity and occupant injury.  He stated that predicting injury risk in low impact crashes based on property damage is unreliable.  Minor Impact Soft Tissue (MIST) strategy was created by the auto insurers to minimize loss in collisions producing less than $1000.  Based on his findings, the MIST protocol for prediction of injury does not appear to be valid.

Kaneoka (4) stated that the human threshold for injury in an automobile accident was found to be at 2.5 mph.

If a direct relationship between damage to vehicles and injury existed, wouldn’t a NASCAR race have serious injuries or fatalities at every event?

Factors that should be taken into consideration after an impact are gender, position of the head, direction of impact, previous injury, and degenerated/arthritic spine.  For further information about these factors, please visit our website.

If you have suffered an injury from an auto accident, your best reliable indicator of the extent of your injury is not how your vehicle looks after a collision, but a comprehensive history and physical examination performed by our Doctors at one of our locations.